Many activities that have an impact on the physical environment require an environmental permit pursuant to the Environmental Permitting (General Provisions) Act (Wet algemene bepalingen omgevingsrecht, hereinafter: Wabo). Companies wishing to undertake such activities must therefore apply for a permit. It is not always clear which preparation procedure applies, how long the procedure will take, and when the permit can be used or can become irrevocable. A previous Stibbe blog post in the FAQ series (dated 1 May 2017) covers the two different preparation procedures for an environmental permit application and explained in which circumstances each procedure applies. This blog supplements the earlier post with a detailed discussion of the decision period, the entry into force and the irrevocability of an environmental permit. We will answer the following questions:

At the bottom of this FAQ there are two timelines which provide a quick overview of the procedures and deadlines discussed below.

The competent authority may decide that the extensive procedure does not apply. However, this is only possible if the performance of the activity is required in the short term due to unusual circumstances, or if the implementation of a treaty or decision binding on the Netherlands requires such. These situations rarely occur. In practice, the competent authority often draws up policy concerning this exception.

If the extensive preparation procedure applies, a decision period of six months applies (Article 3:18 Awb). This procedure takes longer because, unlike the regular procedure, the competent authority must first take a draft decision before it can take a final decision. The draft decision will be made available for public inspection (Article 3:11 Awb), giving everyone the opportunity to submit an view on the draft (Article 3:15(2) Awb in conjunction with Article 3.12(5) Wabo). The period for this is six weeks (Article 3:16 Awb). In this way, everyone has a say in the granting of permits. The applicant for the environmental permit will (where appropriate) be given the opportunity to respond to the views expressed during this inspection period. All of this is done within the six-month period, after which the competent authority must take a final decision, taking account of the views expressed. The competent authority may extend the decision period once by a maximum of six weeks (Article 3.12(8) Wabo). However, the requirements for extension are stricter than in the regular preparation procedure. Extension is only possible if the subject is complex or controversial, the extension will take place within eight weeks after the application has been received, and before a draft decision has been made available for inspection (Article 3:18(2) Awb).

The reason the above-mentioned environmental permits only come into effect after six weeks is that these activities often lead to irreversible consequences. If the permit holder were allowed to make use of the permit immediately, objection or appeal would be rendered practically meaningless in many cases. This six-week period includes the objection, or in some cases, the appeal period (Article 6:7 Awb). In principle, an interested party may object to the environmental permit (Article 7:1(1) Awb). However, if the extensive preparation procedure applies, the possibility for objection is excluded, replaced by an appeal directly to the administrative courts (Article 7:1(1)(d) Awb). The environmental permit will enter into force the day after the expiry of this objection or appeal period. The permit only becomes usable from this point onwards. Until the permit becomes irrevocable, use is at one’s own risk; after an objection or appeal, there is still a chance that the permit may be revoked or annulled.

Exception: in the case of a preliminary injunction

Of course, it is also possible that an application for a preliminary injunction is submitted after the six-week appeal period. In that case, the environmental permit will already have entered into force, six weeks after its publication. However, the entry into force may be suspended by the judgment of the court in preliminary relief proceedings. This is possible both in cases of application for judicial review and on appeal.

The competent authority may decide that an environmental permit enters into force immediately if it deems this necessary (Article 6.2 Wabo). This does not often happen in practice. That comes as no surprise, given that the law provides for certain exceptions for most environmental permits to directly entry into force.

No objection or appeal

Objection or appeal has been lodged

If an objection or appeal has been lodged against the environmental permit, the permit only becomes irrevocable after the final decision. The final decision may be the decision on objection (if no appeal is lodged afterwards) or the decision of the administrative court following an application for judicial review or appeal. The legal proceedings and timeline depend on the environmental permit and the procedure followed.

For environmental permits prepared in accordance with the regular preparation procedure, an interested party must first submit an objection, for which the deadline is six weeks. The competent authority then has six weeks to decide on an objection, or 12 weeks if a review committee deals with the objection. Incidentally, this period may be extended by six weeks and, subject to certain conditions, postponed further (Article 7:10(3) and (4) Awb). This is followed by the decision on the objection, against which the interested party can appeal, again within a period of six weeks (Article 6:7 Awb). Court proceedings may last a year or a little longer. The parties to the dispute may appeal the decision to the Administrative Jurisdiction Division of the Council of State (ABRvS), which again may take up to one year. The bottom line is that it can take more than two years before a final decision is made, and the permit becomes irrevocable. Where the Crisis and Recovery Act applies, this period may be shorter because a special accelerated procedure scheme applies.

If an environmental permit has been prepared in accordance with the extensive preparation procedure, there is no objections phase. Following the decision to grant or reject the environmental permit, an interested party that has put forward its views against the draft decision, may lodge an appeal directly, which must be submitted within the six-week period (Article 6:7 Awb). For this environmental permit, too, court proceedings and appeal proceedings can each last up to one year, which means that it can take more than two years before the permit becomes irrevocable. 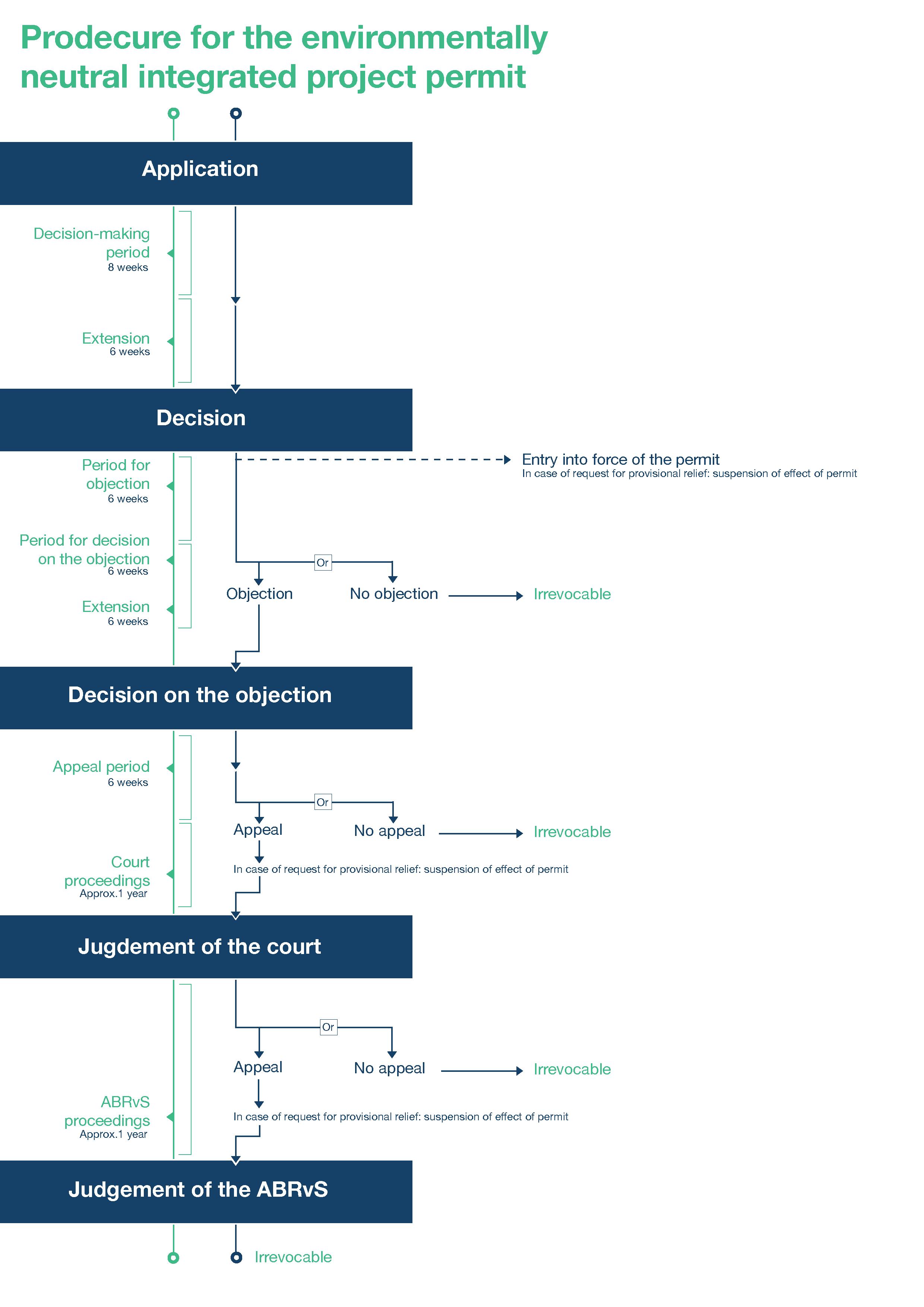 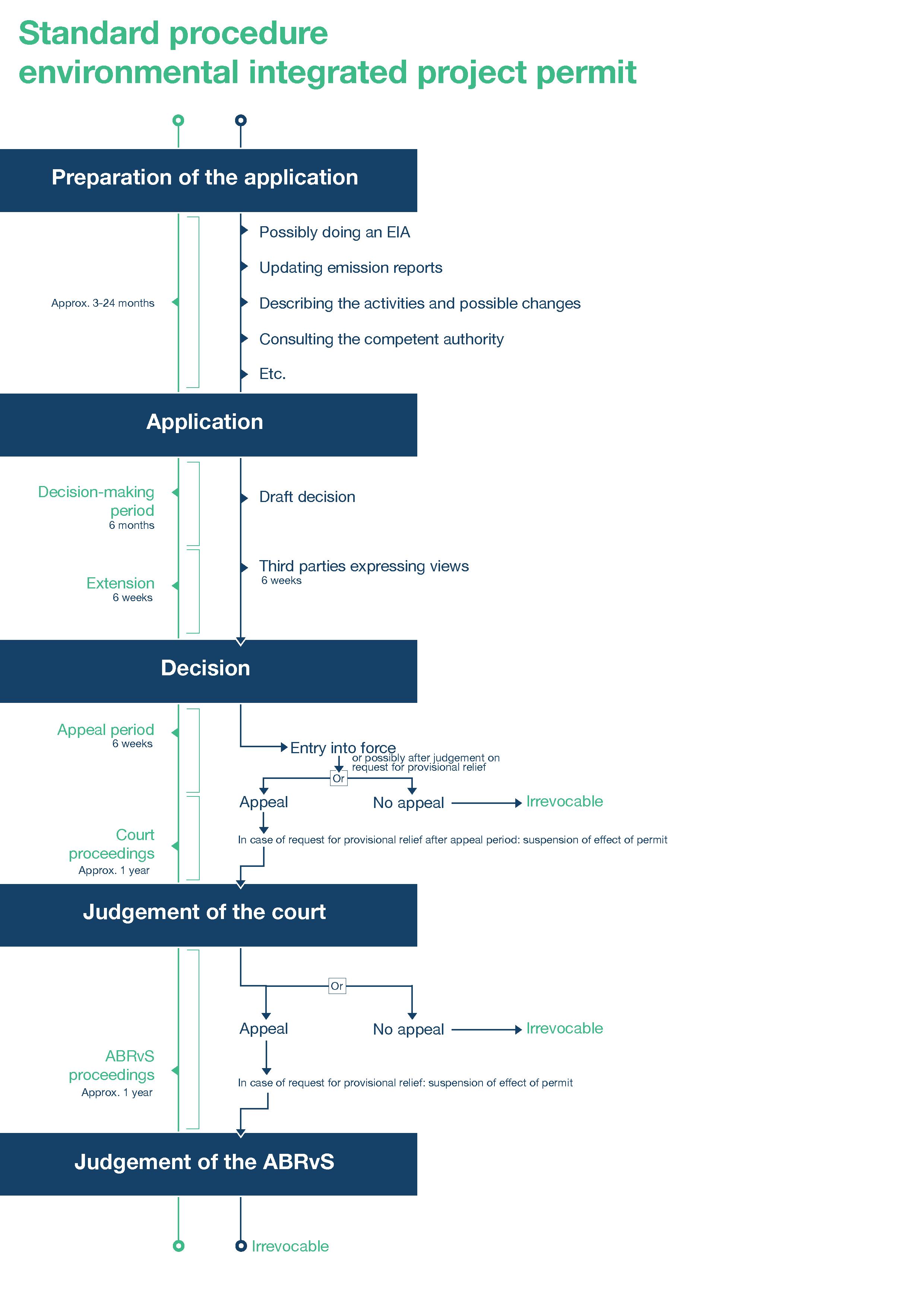 A Dutch translation of this blog can be found here

This is a blog in the “FAQ” series. You can find an overview of all the blogs in this series here.

The blog post ‘FAQ: environmental permit – decision period, entry into force and irrevocability‘ is a blog post from Stibbeblog.nl.

To fulfil your career ambitions in Amsterdam, London or New York, please click here to visit our career website.